It is, perhaps, more than a coincidence that the priest in charge of St. Margaret’s on the 150th Anniversary is an Irishman. Father Martin O’Keeffe was born in Cork, but has served in the Lanarkshire area most of his priestly life. His last parish was St. Vincent’s, East Kilbride, one of the newest areas that once formed part of the parish of St. Margaret. Upon him falls the double task of celebrating the work of his predecessors, and of following the path that they have shown.

Father O’Keeffe has a population of some 2,200 to look after, slightly less than that in the care of the first priest, Father Gallagher, and living in a more residential area. Yet, many of the problems facing the new parish priest are similar to those of a century and a half ago. The depression of the 80s that has closed down many of the heavy industries upon which the locality depended, has produced massive unemployment. To the age-old problem of the abuse of alcohol, has been added the menace of drug addition as people try to escape from hardship and uncertainty. At the same time, St. Margaret’s has once more become a one priest parish, and the burden falls on Father O’Keeffe.

Yet, the story is not unfamiliar to St. Margaret’s, and with the same spirit of Faith that was shown by the immigrants of 150 years ago, there is every hope that the present generation can look forward to a better future. Unlike those first parishioners, the modern Airdrieonian has a number of advantages.

The Church is well-established with a tradition of helping where help is required, and with an organisation behind the priest to help him in his task. The experience of the Parish Council, and long serving parishioners, like John Kelly who has been active in church affairs for over sixty years, St. Margaret’s is well-equipped in 1986 to face the future with hope and trust. 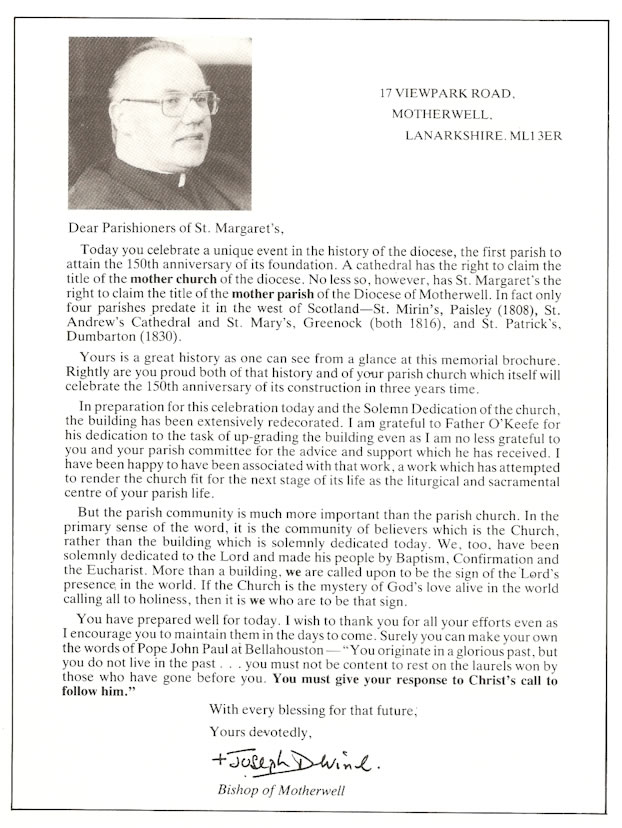