The lands around Airdrie had been given, by Malcolm IV to the Cistertian Order of monks in 1160 and as well as attending to the spiritual life of the area, the monks developed the woollen industry and began mining coal. The Reformation in the 16th Century swept away most of these developments, as well as the monks and their faith, leaving nothing but the name of the area — the Monklands — as a reminder of their presence. For the next two and a half centuries there was little evidence of Catholicism anywhere in Scotland, and it has been estimated that the total number was only a few thousand in the whole country: in view of the Penal Laws that made it a criminal offence to be a Catholic, it is understandable if most were reluctant to make their religion public. The Old Statistical Account of Scotland (1791- 99) states that there were only two known Catholics in the whole of Lanarkshire. Within a short time, however, the industries that the monks had started some six centuries earlier, changed the entire situation.

During the latter part of the 18th Century, Scotland underwent dramatic economic changes that transformed society, and these influences were particularly strong in Lanarkshire. Agriculture was improved by means of new methods and the use of machinery, textile making expanded rapidly, and there was a boom in iron-making, all of which needed vast quantities of coal. The exploitation of the rich resources around Airdrie created a demand for workers that could not be met by the local population. Employment opportunities attracted the poor in Ireland, and a number of changes that took place at the turn of the century encouraged Catholics to come to Scotland. In 1793, the Penal Laws were ended, removing the threat of religious persecution, and by 1820 a cheap, cross-channel steamboat service began, that made the journey easier. By 1800, there were twelve Catholic Churches in Scotland, and around forty priests. 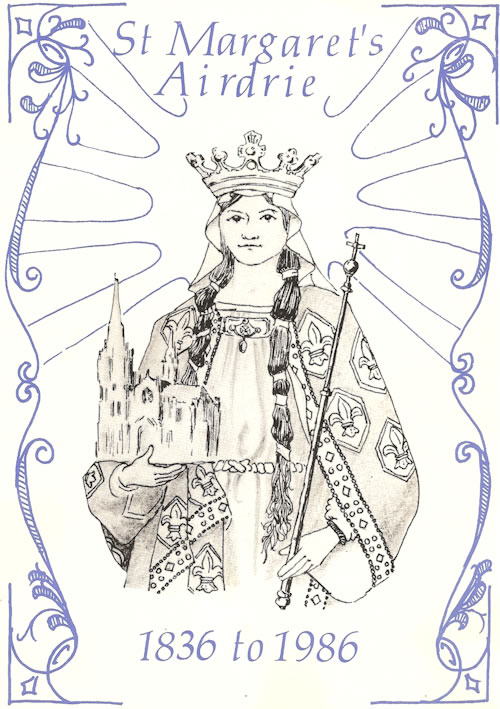 With the passing of the Catholic Emancipation Act in 1829, more Irish were encouraged to seek their fortune in Scotland, and many, landing in Glasgow, found that the South-West, and Lanarkshire in particular, offered work that promised a steady, if low, income with which to keep their families.

Unskilled workers tended to settle where suitable work was to be found, and the opportunities for farm labourers, those prepared to go down the coalmines, or to do the humblest jobs in iron-works, were greatest in Lanarkshire. With them they brought their Faith, and the need to provide for the spiritual well-being of the new workforce soon became obvious. By 1835, the Airdrie area had a Catholic population of around 800, but there was no church and most made the long walk to Glasgow on Sundays to hear Mass in St. Andrew’s Church. Once a month, a priest from Glasgow celebrated Mass in Airdrie, where a room was hired by means of regular subscriptions taken up at Gartsherrie and Calder Ironworks and by gangers in charge of sections building the Airdrie-Kirkintilloch Railway. During this time, Mass was celebrated in a number of different locations — Mason’s Lodge in High Street, rooms in Bell Street, and lastly in rooms in Market Street, then known as Bridewell Lane. It was in this last hall that Mr Delargy opened the first Catholic school in the district.

in 1833, the decision was taken to raise funds to build a church in Airdrie. This decision was not welcomed by militant Protestants and in 1835 a mob of men from the newly formed Orange Lodge in the town, inspired by a visit to Scotland by Col. William Blennerhasset Fairman, attacked the chapel in Market Street and smashed the windows. Retaliation by 100 Ribbonmen from Glasgow was averted by Bishop Murdoch, who not only denounced the marchers from the pulpit in St. Andrew’s, but also informed Sheriff Allison who stopped them reaching Airdrie. Later in the same year, the homes of two Catholics, Robert Canning and Peter Polland, were ransacked after the Orange Walk, and it took the arrival of Sheriff Muir and a body of cavalry from Glasgow to restore order. For some years after, there was a distrust of Catholics, who were suspected of sympathising with the Ribbonmen and republican ideas. This tension was encouraged by a series of lectures in the town, organised by the Glasgow Reformation Society in 1836 and 1838, under the title, “The Evils of Popery”. As a result, there was a number of alarms in the town as rumours spread that Catholics were planning to attack Protestants. It was some considerable time before Scots came to accept that the Irish immigrants were neither radicals nor republicans: indeed, they were very reluctant to take an active part in trade union or political affairs.

Sufficient funds had been collected by 1836 to allow building to start on the site that had been acquired in Halicraig Street. The church was built by a Mr. Paterson, whose descendants operated the building firm of Paterson Brothers, and was built in a similar style to that of most of the Protestant churches of the period: the steeple was not part of the original design and was added later. For the three years that work continued on the church, Catholic men patrolled the site at night to prevent any damage being done. One man found that, while he was guarding the church, his home was attacked, but fortunately no harm came to his family, and the Sweeney’s moved soon after.

St. Margaret’s was opened on Christmas Day 1839, and the first child to be Baptised was James, son of Brian Phillips and Mary Germ, on that day. The next Baptism took place on 3rd February 1840, of William, son of William Gallagher and Margaret Porter. At this time, St. Margaret’s was served from St. Andrew’s, Glasgow, with Father William Stewart coming to Airdrie to say Mass until the church was given its own priest, Father Daniel Gallagher, in 1840.